Big Mac, we set out to settle the beef once and for all by proving that the best way to critics, the Big Mac lovers, to our table for the ultimate taste test challenge.
Table of contents

Get this delivered to your inbox, and more info about our products and services. Privacy Policy. All Rights Reserved. Data also provided by.


Download the latest Flash player and try again. Wells: Big Mac vs. Vining Sparks' Marty Mosby explains why investors are bearish on banks. Investors should focus on high-yield European bonds, strategist says. Schneider Electric exec: Cost of food tech 'coming down dramatically'. Kniffen: retail is a mixed bag. What retail sector earnings reveals about the health of the consumer. Palfrey: yield curve might not be best indicator of risk.

Does the Big King XL really taste like a Big Mac?

Trump's approach on trade and the Fed. Strudwick: companies should remain neutral in HK unrest. This Day in History, August 16, Markets set for higher open, looking to add to Thursday's modest gains. News Update — Pre-Markets. We are at a crisis point with food, acclaimed chef says.

General Electric's response is wrong and they need to be more aggressive: Joe Terranova. Investors need to 'take a breath' amid volatility, says CIO. Allianz's El-Erian: Inverted yield curve recession signal distorted this time around. Jim Cramer: A recession is not inevitable. Madoff Whistleblower alleges that GE is a 'bigger fraud than Enron'. Markets point to a lower open after Wednesday's sell-off. China vows to retaliate against the US for Sept. 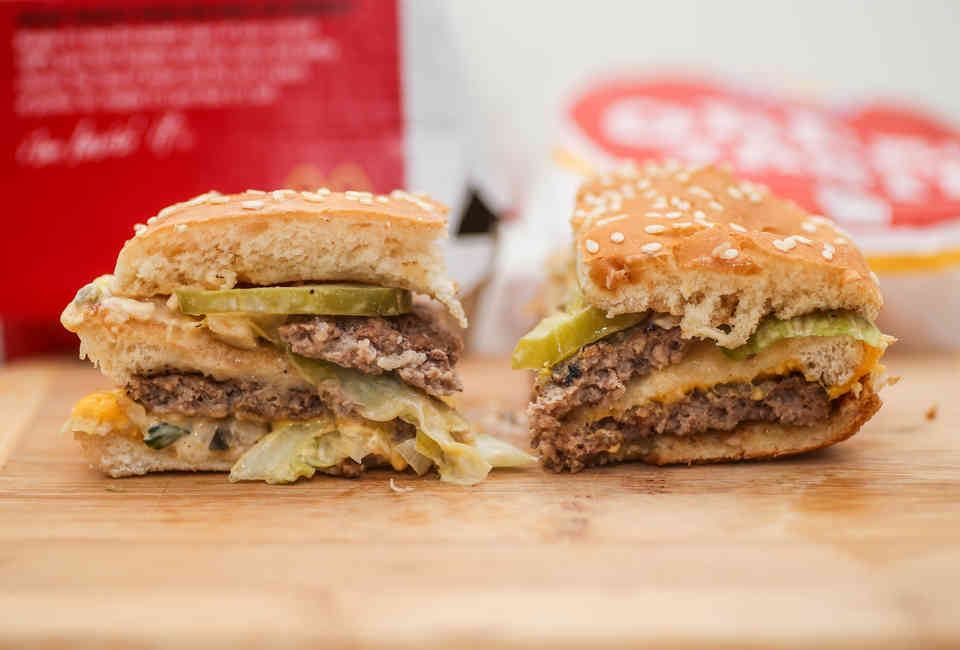 Trump suggests face-to-face meeting with Xi. Maybe it's because this promotion is only a few days old, but there was no signature packaging to distinguish it from any of their other burgers and unwrapping it didn't feel like a very special experience.

Winner: Big Mac The box made me way more excited and is a huge part of the Mac's overall aesthetic. If Burger King really wants to compete, they've gotta realize that the Yankees always win because nobody can keep their eyes off the pinstripes. Big King: Two savory fire-grilled beef patties, topped with melted American cheese, fresh-cut iceberg lettuce, crisp onions, crunchy pickles, and featuring a sweet Thousand Island-style dressing, all on a warm, toasted, sesame seed bun. Winner: Big Mac I want ingredients I can sing, not read. And while the King's English includes more description, I prefer my burger slathered in special sauce rather than special types of words like adjectives.

Stands tall and proud, like it just came out of a really nice box. Big King: Nearly a centimeter shorter than the Big Mac. It's kind of slouching, like it just got caught copying someone's answers on a taste test.

Burger King Survey, Not Sales, Brands Whopper as the 'Favorite'

Winner: Big Mac Bigger is better, and the Mac is definitely bigger. Big King: This tastes much more like a burger. You get the sense they haven't cleaned off the grill in awhile and it's almost like you're eating the concentrated byproduct of hundreds of slightly burned pieces of beef. The lettuce has more crunch and the sauce is less overwhelming. Winner: Big King Savory trumps sweet.

And tastes like snow that's rested for awhile and maybe has a leaf or two in it, but it's still pretty good.

The middle bun is really the signature asset of the sandwich, and it somehow manages to stay soft and fluffy despite the weight of the patty. After a few chews, the special sauce turns the bun into a creamy mush that's an ideal complement to overall theme of sweet over savory. Big King: The bun is a bit crushed and puck-like.